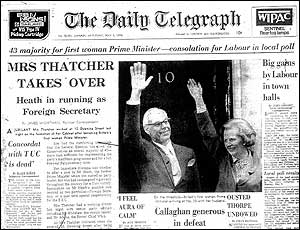 The 48th Parliament of the United Kingdom saw a Conservative Majority of 43, headed by the first British woman Prime Minister, Margaret Thatcher. Conventional wisdom held that no Prime Minister could avoid appointing a Cabinet which contained her political rivals and ideological opponents. The main ideological division at this time within the Conservative Party was between the "Wets" (traditional Conservatives - who believed in maintaining the welfare state and the mixed economy, essentially at the levels of the period 1945-1979, who saw a social obligation towards the poorer members of Society; and who regarded unemployment as the greatest danger) and the "Drys" (the New Right that wanted privatisation; significant cuts in Public Spending; and the removal of many of the rights enjoyed by the Trade Unions and workers). While Thatcher appointed a balanced Cabinet in 1979 - by 1983 she had removed most of the "wets".

Within the Parliamentary Party there were some rebellions - but it was a less stressful period for the whips. Michael Jopling was Chief Whip in the Commons throughout the Parliament. Outside Parliament conditions were rougher. Plans to institute a programme of coal mine closures in February 1981 were withdrawn in the face of opposition from the Miners' Union. A Steel strike was fought in 1980. A recession - which many regarded as the result of the Monetarist policies pursued by the Government led to increased unemployment - and in 1981 a wave of riots spread across the country. Thatcher looked to be in danger of being a one-term Prime Minister.

Her survival was helped by the fact that the opposition Labour Party was deeply divided. In March 1981 some of its leading figures left the party to form the Social Democratic Party. This new party soared in the opinion polls. In April 1982 the junta in Argentina ordered an invasion of the Falkland Islands. I was in the public gallery when she came in to the Chamber to announce the surrender by the Argentinians. A successful task force had made Mrs Thatcher a national hero.

In June 1983 a General Election left Thatcher with a large majority of 123.

Books about the period include -