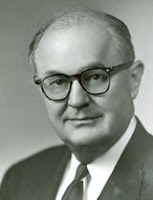 When the 94th Congress first met in January 1975, the Dean of the House was Wright Patman, a Democrat from the first district of Texas (In the North East corner of the State - including the towns of Marshall, Paris, and Texarkana). He had served in the House since January 1929. He was a supporter of FDR's New Deal and his first piece of legislation was  the Veteran's Bonus Bill, which required the immediate payment of a bonus promised to World War One veterans. It didn't pass during the Hoover Administration - but eventually passed in 1936.

He chaired the Committee on Banking and Currency from 1963 to 1975, but was one of the first victims of rule changes in the Democratic Caucus. That year they voted to make all nominees for committee chairmanships subject to automatic, secret ballot election by the caucus. This was the end of the 'Seniority System'. The Freshmen Group [new members elected to the House that had not been members of the House in any earlier Congress] invited all the Chairs to address their group - some performed better than others. (Edward Hebert made the mistake of patronisingly calling them 'boys and girls' in his 'interview'). Three existing Chairs failed to be re-elected. The 81 year old Patman was one of them.

Patman's committee had played an important role in the early stages of the Watergate affair. It sought to trace the money found on the burglars to the Committee to Re-Elect the President. The initial letter containing the details of the staff investigation is available here. The inquiry was shut down. Patman's efforts may have influenced the later inquiries which blew the scandal apart.