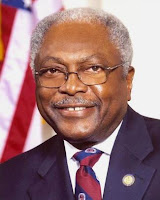 More information can be found about the details of legislation being considered by the House of Representatives in "The Whip Pack", which is published weekly by the Majority Whip. The Internet version contains further links which are useful if you want to follow the progress of a particular bill. In addition there is information about key issues on his website.

The Minority Whip also provides details of business and a blog about the issues, as seen from the Minority's perspective.
In the 111th Congress the Majority Whip is James Clyburn of South Carolina (pictured) and Eric Cantor from Virginia is the Minority Whip.
Posted by J David Morgan at 05:04