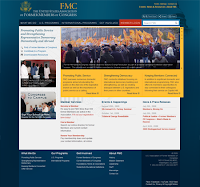 Former members of both the US Congress and the UK Parliament have organisations which enable them to keep in touch with their former colleagues. The United States Association of Former Members of Congress was founded in 1970 and now has around 550 members. It organises a "Congress to Campus" programme - which takes former members into schools and universities to share their experience and explain how Congress works. There are other programs described on its websites - and details of two books in which former Members experience and insight into the working of Congress is described.
Inside the House, Former Members Reveal How Congress Really Works brings to life the inner workings of the Congress via 44 essays by 35 former Members, a congressional spouse, and two congressional staff members.
Political Rules of the Road is a collection of over 500 political rules by almost 200 former Members of Congress, including several presidents. The authors explain the rules that guided them during their political lives and explain via anecdotes how they best applied.
In the United Kingdom "The Association of Former Members of Parliament" exists for former MPs. It has a newsletter which is published on its website.
Posted by J David Morgan at 05:12