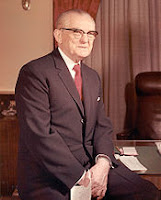 Along Massachusetts Avenue in Washington DC is an important institution set up to "promote and strengthen public service leadership in America". It has a number of programs including -

For non-congressional staff there is also

The Center was established by the US Congress as a tribute to Senator John C. Stennis. The center was created by Public Law 100-458, October 1, 1988, and is codified in the United States Code under Title 2-The Congress, Chapter 22.

Senator Stennis retired in 1989 - and died in 1995. He lost a leg to cancer during the 1980s and was almost killed when shot during a mugging in Washington DC.
The Center's website can be accessed directly from here.
Posted by J David Morgan at 05:22