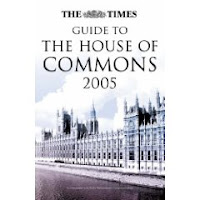 Over the last two days I have briefly described two guides to Members of Congress. In the UK there are similar guides to Parliaments. I have been buying copies of the "Times Guide to the House of Commons" since I picked up a copy of the October 1974 Edition whilst visiting Hull in the mid 1970s. My greatest regret is that the Times Guide stopped giving details of the major defeated candidates in each constituency from their 2001 edition. It was in 2001 that I first stood for Parliament!

The first Times Guide covered the 1880 election. The earliest one in my personal collection is 1966. Other publishers have started their own guides. Dod's produces a guide after each general election - where MP's are listed by order of surname (The Times Guide lists in Constituency order). An "Almanac of British Politics" has been published for the last 35 years. While this gives a brief biography of each MP, it's strength is the detail it gives of each constituency. The current edition has lots of details about the new constituencies which take effect at the forthcoming General Election.
Posted by J David Morgan at 05:15