Born in Washington DC - Part One

Washington DC has attracted people from acrossthe USA (and the world). In this short occasional series I will look at some of the people actually from DC.


Edward Kennedy Ellington, Duke Ellington, was one of the giants of Jazz. He was said to have been born at 2129 Ward Place, NW Washington [now 1217 22nd Street, NW] - a house commemorated by a plaque. (He certainly grew up there, but his parents have moved in after his birth - per A H Lawrence). His father occasionally worked as a caterer at the White House, but his main employer was a Dr Middleton F Cuthbert. He aquired his namename of "Duke" as a child - and throughout his life was noted for his elegant style. He played piano - but is renowned for his band leading; arranging and composing. 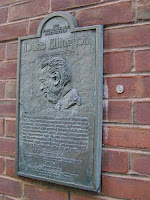 He gained some early local success in Washington - but moved to New York where his career really took off.
There are a number of biographies available. I very much enjoyed reading A H Lawrence's 'Duke Ellington and his world' (New York: Routledge, 2001). There is also a very full wikipedia article.
Posted by J David Morgan at 05:26