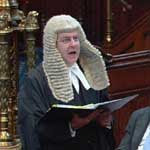 It is expected that Parliament will be 'prorogued' today. This will bring the 2006/07 Session to an end. The new session will begin with the State Opening of Parliament on November 6th. The parliamentary website states -

"Prorogation usually takes the form of an announcement on behalf of the Queen made in the House of Lords. As with the State Opening, it is made to both Houses. Unlike the Queen's Speech, the prorogation announcement receives relatively little media coverage.
The prorogation announcement sets out the major Bills which have been passed during that parliamentary session and also describes other measures which have been taken by the Government.
Prorogation brings to an end nearly all parliamentary business."
Unless there is outstanding business the ceremony will begin at 11.30am UK time (Note: Daylight Savings Time ended on Sunday - so time difference with Washington DC is 4 hours)
Posted by J David Morgan at 08:11