How much does it cost to run Congress? 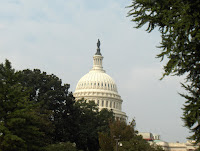 This week the House of Representatives will begin floor proceedings on the Legislative Branch Appropriations Bill. For Financial Year 2008 $4,330,451,000 has been requested - an increase of 14% from 2007. What would this be spent on?

The running of the Senate $869.3 million - mainly for the personnel and office expenses of individual Senators; and the salaries of officers and their employees.
House of Representatives - as for the Senate, but these costs amount to $1.2 billion
Architect of the Capitol - the costs of the maintenance, operation, development and preservation of the Capitol complex (which includes not only the main Capitol building but House & Senate Offices; the grounds; the buildings and grounds of the Library of Congress; Capitol power plant; Botanic Garden and the new Capitol Visitors Center are estimated at $481.7 million
Capitol Police - This department will the full time equivalent of 2,125 people. Staff and other costs will require $299.1 million.
Support agencies, which provide information and carry out key work for the Congress are asking for the following: -
Congressional Budget Office: $37.97 million
Library of Congress $661.6 million
(including $108.7 million for the Congressional Research Service)
Government Accountability Office $523.8 million
Government Printing Office $181.98 million
Office of Compliance $ 4.1 million
Open World Leadership Center $14.4 million
John B Stennis Center for Public Service Training & Development $430,000