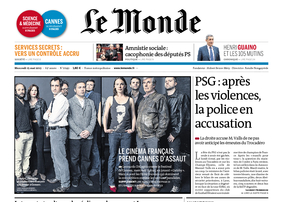 Some years ago I studied French Law - and in the first lecture at the Universite de Poitiers, we were told by the lecturer that we needed to read, on a regular basis, 'Le Monde' - the newspaper published in Paris on each afternoon (except Sundays) - though it's masthead date is the following day.

It's website is http://www.lemonde.fr/. I enjoy a subscription which allows me to read each edition, but so much more. A short video is available at

The coverage of French politics is excellent - and a supplement is produced after national elections (which I have been collecting for years in the print version). I like the ability to download the paper to read when I don't have internet access. Online there are lots of videos - and a new application - "Journal Tactile enrichi" has been launched for iPads. (which I quite like!)