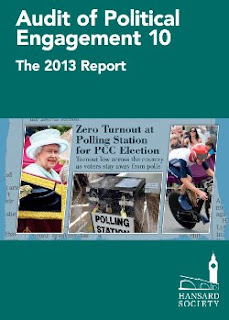 Last week I attended the launch of the Hansard Society's annual Audit of Political Engagement. I've been attending these for many years. Sadly the reports show a trend in which fewer and fewer people say that they intend to vote. There's some really useful data and analysis. I thoroughly recommend the audit -

Further details - and a link to download the report - can be accessed here.

There was some encouraging news. 47% of people surveyed said that they wish that they had learned more about politics and how our democracy works. Of those

There is a need!

Ilya Somin wrote - "Democracy demands an informed electorate. Voters who lack adequate knowledge about politics will find it difficult to control public policy. Inadequate voter knowledge prevents government from reflecting the will of the people in any meaningful way. Such ignorance also raises doubts about democracy as a means of serving the interests of a majority. Voters who lack sufficient knowledge may be manipulated by elites. They may also demand policies that contravene their own interests."

Democracy is never perfect - but as Churchill once said -  "Democracy is the worst form of government, except for all those other forms that have been tried from time to time."

(to give a fuller quote from his speech to the House of Commons on 11th November 1947) - "Many forms of Government have been tried, and will be tried in this world of sin and woe. No one pretends that democracy is perfect or all-wise. Indeed, it has been said that democracy is the worst form of Government except all those other forms that have been tried from time to time; but there is the broad feeling in our country that the people should rule, continuously rule, and that public opinion, expressed by all constitutional means, should shape, guide, and control the actions of Ministers who are their servants and not their masters."

If our complex democracy - which now functions at many levels from the parish council to the European Parliament - is to operate properly, we need to ensure that every citizen has access to information about how our institutions work - and how they can have their interests catered for. If Parliament were to become a place where only those in the know; only those who can buy access - could participate - then we would be a much worse country.
Posted by J David Morgan at 05:30