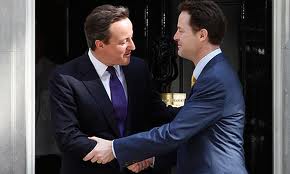 At the height of the impeachment process of President Clinton - the media discovered that a number of his congressional accusers themselves had done similar things. Henry Hyde's dismissal of his own four-year long extramarital sexual affair as a "youthful indiscretion", has become notorious. He of course was the Chair of the Judiciary Committee who wrote the Resolution of Impeachment and was Chief Prosecutor at the trial in the Senate. Hyde was himself 41 years of age at the time of his affair. The drama of the impeachment itself was heightened when it was revealed that Bob Livingston, who was due to succeed Newt Gingrich as Speaker, had had a number of extra-material affairs. He resigned. Of course, Newt himself has had a series of marriages - marrying the latest person he had been conducting an affair with.

Now the term has come back to haunt the leaders of the coalition government in Britain. We've heard Prime Minister, David Cameron and Deputy Prime Minister, Nick Clegg demand that the criminals involved in this week's rioting face the consequences of their actions. As the Prime Minister said, "Anyone charged with violent disorder and other serious offences should expect to be remanded in custody, not let back on the streets; and anyone convicted should expect to go to jail."

The Social Media has seen the resurrection of stories these leaders would have prefered forgotten.

The Financial Times - in their respected "Westminster Blog", ran an exclusive about Cameron and his involvement in the drunken and disorderly activities of the Bullingdon Club (April 4th 2010) - available here.
In 2007 Nick Clegg's conviction for arson as a teenager was revealed. The BBC reported on the story here.
Posted by J David Morgan at 05:10