Primaries for the French Presidential Election 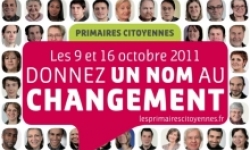 This summer six candidates have been campaigning to be chosen as the person to represent the Parti Socialiste/Parti Radical de Gauche ticket in next year's French presidential election. The Presidential election takes place on 22nd April (1st Round); and 6th May (2nd Round - with just the two remaining candidates).

This year the main candididate of the left will be chosen in primaries taking place nationally on 9th October (1st Round) and 16th October (2nd Round - if no candidate has won over 50% of the votes).

Martine Aubry - Mayor of Lille and First Secretary of the PS since 2008 (she has stood aside from this during while standing as a candidate). The daughter of former European Commission President, Jacques Delors, she has been a Minister in the governments of Cresson & Jospin. Website

Francois Hollande - currently a depute in the Assemblee nationale; and the President of the General Council (departement) of Corrèze - he preceded Aubry as Party Secretary. Website

Ségolène Royal - candidate for the PS at the last presidential election, she is President of the Poitou-Charentes Regional Council. She had some ministerial experience in 1997-2002. Website

Arnaud Montebourg - A member of the Assemblee nationale and President of the General Council of Saone-et-Loire. Website

Manuel Valls - Mayor of Evry and member of the Assemblee nationale. Website

Jean-Michel Baylet - the only one of the six candidates to come from the Parti Radical de Gauche. He is a Senateur, and President of the General Council of Tarn-et-Garonne. Previously he had served as a minister in the governments of four PS Prime Ministers. Website

Further information (in French) about the "primaires citoyennes" can be found here.
Posted by J David Morgan at 10:21