Teams play each other within and across Conferences and Divisions. There is a scheduling formula to ensure rotation of games over a period. It is described on p16 of the Official NFL Record & Fact Book 2011.

How can you record who plays in which conference and division. The MindMap below - which stresses the connections - and has some spatial relationships (the teams in each division are in the rough position of the cities relative to each other).

Tap the MindMap to enlarge it.

Does this way of representing the information make it easier to remember who the teams are - and which Conference/Division they play in? It may be a technique which may help you record and remember key information for your exams! 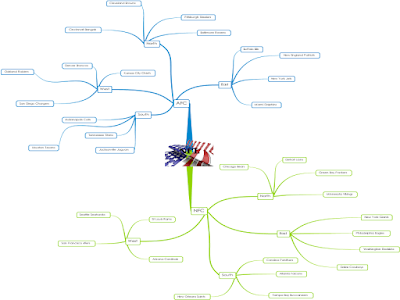