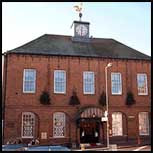 There are two models os speakership. In the United States House of Representatives the "majoritarian model" has been long established. The Speaker comes from the party holding a majority of seats, and remains the key leader of that party. In the House of Commons the newly elected Speaker leaves their original party - and even after completing their service - remains as an independent. Most Speakers upon retirement take a seat in the House of Lords, and sit as a crossbencher. This model can be referred to as the "moderator speakership". [There is an excellent description of both, and a discussion of why the original moderator model adopted in the first Congress gave way to the current majoritarian model in "Masters of the House" by Roger Davidson; Susan Webb Hammond and Raymond W Smock].

While the British Speaker is no longer a member of a party, he (or she - Betty Boothroyd was Speaker from 1992 - 2000 - her "Autobiography" is an excellent read - and describes her experience working in Congress during the early 1960s!) - remains a Member of Parliament, representing his constituency. At election time a Speaker seeking to remain at Westminster stands as "The Speaker seeking re-election". It is said that there is a convention that Speakers are not opposed for re-election, but the reality is that they now usually face at least fringe candidates - and in 1974 Selwyn Lloyd faced both Labour and Conservative opponents in his Wirral constituency. Nationalist candidates have challenged George Thomas (1979) and Michael Martin (2001 & 2005). Speaker Bercow faced a very active and high profile campaign by UKIP this year - and another candidate, a former Tory MEP, overcame the UKIP campaign by gaining over 20% of the votes. Speaker Bercow failed to win a majority of votes (47.3% of votes cast). He had faced 10 opponents. Full results here.

Speaker Bercow's constituency is Buckingham - which is adjacent to Milton Keynes South, where I am a resident [Some of the Arriva buses in the city STILL have the UKIP election adverts on them!].  Once the Buckingham constituency covered Milton Keynes - Robert Maxwell was MP when the new city was created. Now it covers the county town and a large rural area. John Bercow maintains a website - reminding his constituents that he remains an active constituency MP, providing the same services as any ordinary MP would do (though it is thought that a Minister receiving a representation from Mr Speaker may give greater weight to it!).
Posted by J David Morgan at 05:01