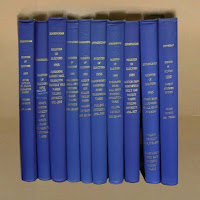 Already the political analysts and activists have been poring over the detailed statistics about the UK Election. If you've been missing out, can I recommend the preliminary analysis by the House of Commons Library [yes, there's more to come!] available here.

One figure that will be frequently mentioned is turnout. The Turnout percentage is the number of votes cast {times 100} divided by the number of people eligible to vote on election day. That figure comes from the Electoral Register.
The trouble is that the electoral register is not entirely accurate. Some people have died since the register was prepared (sometimes when canvassing, I ask for a person on the register - only to be told that they died - occasionally the death occured years ago). Also not everyone is on the register.
That is important for electoral purposes. Inevitably during an election you find people who should be able to vote - but cannot, because they are not on the register. It is also important for other reasons. Members of juries are selected (at random) from the Electoral Register. Evidence suggests that certain groups are much less likely to be registered - which distorts the representativeness of juries.
In 2005 a Commons Select Committee published a detailed study into electoral registration. Chapter Three on "Encouraging Registration" begins with consideration of "the problem of non-registration". It is worth reading - whether your interest is in politics or the functioning of the legal system.
The report states "The most recent estimate we have is that in 1991, 93% of those eligible to vote in Britain were registered, but beneath this headline figure, there is a more worrying picture where “non-registration rates appear to vary by geographical area, by age, ethnicity and property ownership/tenure”. Of course, several factors will apply in some individual cases but in general those less likely to be registered are: men; those living in London; those living in urban areas and areas of economic deprivation; those aged 17 to 24; those in privately rented accommodation; and those from black and minority ethnic communities."
A report carried by the BBC in March 2010 said "The Electoral Commission said more than 3.5m people may not be registered. Its research suggested 56% of 17-25 year olds were not on the electoral roll."
The Commons committee report is available to read and download from here.
Posted by J David Morgan at 05:14