To drink or not? 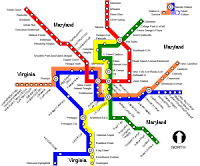 During the summer (not relevant now as it is bitterly cold in the UK) - notices on the London Underground advise travellers to take bottled water with them as they travel. Due to problems with the summer heat in the system - that water is needed. It is not unusual to see people drinking and even eating on the trains. However don't do it on the Washington Metro!

You'll often read of similar stories to the following -
"Metro officials in the U.S. capital have had enough of messy eaters breaking no-food rules -- as 12-year-old Ansche Hedgepeth learned when she was arrested at a subway stop for eating french fries.
Metro spokesman Ray Feldman said on Thursday Hedgepeth was an unlucky victim of a weeklong crackdown at a Metro station in northwest Washington and policies that leave police with no middle ground between issuing a warning and arresting young food offenders."
The two systems are very different in other ways. London's underground has ancient origins. It was the first underground system in the world, with the first section opening in 1863. It was used for mass bomb shelters in World War Two. Washington's Metro opened in 1976. It lies much closer to the surface. The earlier London Underground lines were barely subsurface - but some of the later lines are very deep indeed.
For more information on the systems visit
London Underground
Washington Metro
Posted by J David Morgan at 05:49