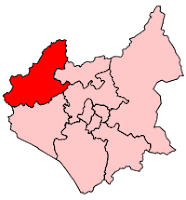 With the death of David Taylor, there is a vacancy in the constituency of Leicestershire North West. A General Election must be held by 3rd June 2010 (in five months time, or 160 days after the seat became vacant). Must a by-election be held before that date?

The answer is very clearly NO. Erskine May states that "the Speaker may be ordered by the House, upon a motion made by any Member, to issue a warrant to the Clerk of the Crown for a new writ for the place represented by the Member whose seat is thus vacated"
The normal practice is that the Motion for a new Writ is moved by the Chief Whip of the party that formerly held the seat. However there is no obligation for him (it would be Nick Brown) to do so, and he does not enjoy the exclusive right to move the writ. The writ can be moved "by any Member". However such a motion could be defeated. A Factsheet from the House of Commons states that "The motion cannot be moved again (for the same constituency) within the same session of Parliament if it is defeated." It is usual to stop an attempt to move the writ by amending the motion to leave out from “That” to the end of the Question and add
“this House do pass to the Orders of the Day.” Such an amended motion would allow a later motion to move the writ.
This was last done on July 21st last year, in an attempt by the SNP to force the issuing of a writ to fill the seat formerly held by Michael Martin - Text of Hansard.
Failing to move the writ is frequently criticised by members of the parties who currently do not hold the seat. There was a recommendation by the Speaker's Conference on Electoral Law in 1973 that the motion should normally be moved within three months of a vacancy arising.
Michael Rush wrote a very interesting article on "The Timing of By-Elections" in the September 1973 edition of of Parliamentary Affairs (Vol. 27, No. 1973sep pp44-66). It deals with many aspects of the selection of dates up to 1973. It also reveals the extreme delays.
373 days - Wrekin. J Baldwin-Webb was lost at sea on 17th September 1940: legally presumed dead in April 1941: further delay caused by a dispute in the local Conservative Association over a successor: by-election held on 26th September 1941.
252 days - Newcastle-under-Lyme. Stephen Swingler died 19th February 1969: By-election held on 30th October 1969.
The diagram on this post shows the North West Leicestershire constituency - within the county of Leicestershire.
Posted by J David Morgan at 05:05