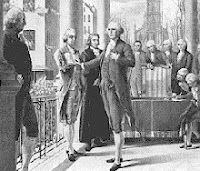 George Washington was unanimously elected as the first President of the United States. Results were a bit slow in coming - the votes were cast early in January 1789, but were not counted until April 5th. Washington then made his way from his home at Mount Vernon, Virginia to New York where the presidential oath of office was administered on April 30th. He then spoke to a joint session of Congress.

A Senator, William Maclay, described the scene in his diary -

"The President advanced between the Senate and Representatives, bowing to each. He was placed in the chair by the Vice-President; the Senate with their president on the right, the Speaker and the Representatives on his left. The Vice-President rose and addressed a short sentence to him. The import of it was that he should now take the oath of office as President. He seemed to have forgot half what he was to say, for he made a dead pause and stood for some time, to appearance, in a vacant mood. He finished with a formal bow, and the President was conducted out of the middle window into the gallery, and the oath was administered by the Chancellor. Notice that the business done was communicated to the crowd by proclamation, etc., who gave three cheers, and repeated it on the President bowing to them.
As the company returned into the Senate chamber, the President took the, chair and the Senators and Representatives, their seats. He rose, and all arose also, and addressed them. This great man was agitated and embarrassed more than ever he was by the leveled cannon or pointed musket. He trembled, and several times could scarce make out to read, though it must be supposed he had often read it before.
He put part of the fingers of his left hand into the side of what I think the tailors call the faIl of the breeches (corresponding to the modern side-pocket), changing the paper into his left (right) hand. After some time he then did the same with some of the fingers of his right hand.
When he came to the words all the world, he made a flourish with his right hand, which left rather an ungainly impression. I sincerely, for my part, wished all set ceremony in the hands of the dancing-masters, and that this first of men had read off his address in the plainest manner, without ever taking his eyes from the paper, for I felt hurt that he was not first in everything.
He was dressed in deep brown, with metal buttons, with an eagle on them, white stockings, a. bag, and sword.
"