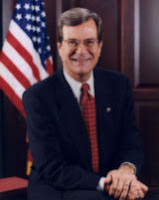 Trent Lott, Minority Whip in the Senate, has announced that he will resign his seat before the end of the year. Congress will be losing one of its most interesting characters. Senator Lott arrived in Washington as the Administrative Assistant to Congressman William Colmer, a Democrat who chaired the Rules Committee. When Colmer retired Lott ran to succeed him - as a Republican - and won with Colmer's endorsement.

Senator Lott has served as Republican whip in both Houses of Congress - in the House of Representatives 1981-89 and in the Senate 1995-96 and 2007 - the only person to have been the senior party whip in both chambers. He was Leader of the Senate 1996-2001 and Minority Leader until his forced resignation in 2001.
It was remarks made at the 100th birthday celebration which led to his resignation. Lott said ""When Strom Thurmond ran for president, we voted for him. We’re proud of it. And if the rest of the country had followed our lead, we wouldn’t have had all these problems over the years, either." Thurmond had been the segregationalist candidate in 1948.
Remarkably Senator Lott rose from political death to return to the Republican leadership in the Senate. His autobiography is called "Herding Cats".
Posted by J David Morgan at 04:40