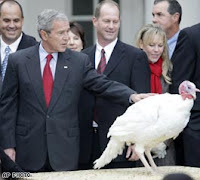 The Royal Pardon is infrequently used in the United Kingdom. It is one of the Royal Prerogative powers, only used on the advice of the Home Secretary or the First Minister of Scotland (or the Secretary of State for Defence in military justice cases).

In the United States the power to pardon is used more often - by tradition an outgoing President grants a number of pardons. Another tradition is annual - the pardoning of a turkey before Thanksgiving. On Tuesday President Bush delivered a full presidential pardon to the national Thanksgiving turkey in the Rose Garden at the White House. He also announced the names of the bird and its alternate, which were chosen by people who voted online. They will officially be called May and Flower, the president said.
Happy Thanksgiving Day to all our American readers.
Posted by J David Morgan at 08:35