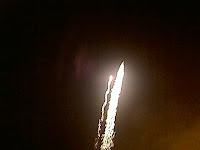 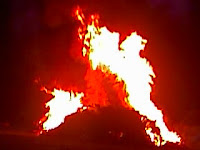 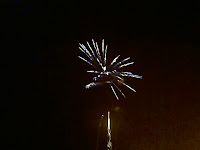 November 5th was decreed by an Act of Parliament ( 3 James Chapter 1) as a day of thanksgiving for "the joyful day of deliverance". This piece of legisalation remained in force until 1859. "fireworks night" is still celebrated, as evidenced by the photographs I look last Saturday at a display in Countesthorpe, Leicestershire.
While I work at Westminster, yards from the site of the cellar in which Guy Fawkes was discovered preparing for a terrorist attack on parliament which would have killed many MPs, Peers and King James I - I live in Rugby, close to Ashby St. Ledgers - where Robert Catesby spent much of his time, and where much of the planning of the plot was undertaken. Also just to the south of Rugby is Dunchurch, where the plotters awaited news of the outcome of the conspiracy.
In recent years celebrations of halloween have overshadowed Guy Fawkes night, which was the major occasion when I was a boy. Nowadays there is more emphasis on large organised displays rather than family fireworks - mainly because of the cost of fireworks and concern about accidents.
Moe information about the gunpowder plot - which occured 402 years ago - can be found at http://www.rugby.gov.uk/site/scripts/documents_info.php?documentID=438&pageNumber=1.
Posted by J David Morgan at 05:49