To follow the debate on the European Union (Notice of Withdrawal) Bill (or ANY bill) in the House of Lords, you need to equip yourself with the version of the bill that the Lords will be using.

A quick word of caution here - a Bill goes through a number of printings; after any amendments have been made - and when it comes up to the Lords from the Commons. Helpfully, on the website - the 'latest bill' is always highlighted.

Amendments, if passed, would amend the text of that version of the bill. So you need to look at the wording of the amendment, to see what it would do.

Amendments tabled in the House of Lords [Note for my American readers - tabled in the UK Parliament is the OPPOSITE of 'tabling' in Congress. Tabling in the USA is the term used for killing off a bill or an amendment (by throwing it under the table). In the UK tabling means putting on the table. So in the UK "I am tabling an amendment means - "I am putting an amendment down for discussion"] are numbered then printed. You can access the amendments here. These amendment papers are the second (set) of documents needed.

On the pdf version of the bill, you'll see the page number at the top. 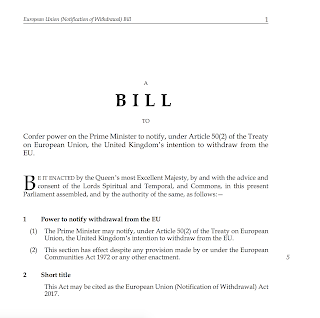 Page 1, as you can see is numbered, but is not the first page of the whole document.

so if Lord Lea's amendment was passed the bill would read

(1) The Prime Minister may notify, under Article 50(2) of the Treaty on European Union, the United Kingdom’s intention to withdraw from the EU while retaining membership of the European Economic Area (EEA)

A more complex amendment - which still is a simple "insert" is

LORD KERSLAKE
Page 1, line 3, at end insert—
“( ) No agreement with the European Union consequent on the use of the power under subsection (1) may be ratified unless a full report has been produced by Her Majesty's Government on the implications of that agreement for—
(a) the future of the United Kingdom, and
(b) the economic, social and political relations of the United Kingdom with the Republic of Ireland;
and each House of Parliament has had an opportunity to consider this report.”

The effect of this amendment passing (as well as adding these words) would require that a specific report MUST be produced by the Government before any negotiated deal could be ratified.

A whole new clause could be added - (if the bill becomes an act it would be known as a 'section'), as with this amendment

(3) In the case of a proposed agreement setting out the arrangements for the withdrawal of the United Kingdom from the European Union, the resolution under subsection (1) must have been passed by each House of Parliament before the proposed terms are agreed with the Commission, with a view to their approval by the European Parliament.”

All of the current amendments seek to add to the provisions in the bill. (It is such a short bill, that removing words or clauses - at this stage is near impossible. But should any of amendments be passed, we would expect amendments at later stages, particularly at "Ping-pong" stage - to take words or clauses out.)

"Leave out" is the key phrase to remove words in a clause, or the clause itself - as in
"Leave out..... and insert" is the wording to remove and replace by new wording.


The effect of that would be to turn a power to do something into a duty!

To know more - go to the very useful guide to amendment style - which is available at -
http://www.parliament.uk/documents/publications-records/House-of-Lords-Publications/Rules-guides-for-business/Guidance-members-HL/Guide-to-HL-Amendment-Style.pdf

***  All these points relate to amending the Act itself. That will start at the Committee Stage. But first, 2nd Reading must be held. That will be on the MOTION "that the bill be now read a second time." Such a motion can be amended or rejected. (Both are very rare).
Posted by J David Morgan at 05:30