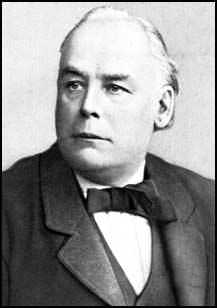 Charles Bradlaugh provoked many controversies, and many myths have grown around him. Last night, Deborah Lavin demolished the myths, and presented an absorbing story of a persistent man, who attracted some very powerful enemies. The talk (which will be repeated at 11.00am and 2pm on Sunday 25th October - as part of the Bloomsbury Festival - and I would thoroughly recommend attending) covered the life of the MP for Northampton. I had always understood it to be case that Bradlaugh was kept from taking his seat by the parliamentary manoeuvres of the Tories, who seized an opportunity to embarrass the incoming Liberal Government of Gladstone. But Lavin made a persuasive case for Gladstone himself being the culprit, eager to be rid of a "supporter" he detested.

It was an ugly fight. As an atheist, he sought to affirm rather than take the oath on a Bible. That had been allowed in courts as a result of legislation - which  Bradlaugh had used as a Solicitor's clerk, prior to the change in law he had complied with the requirement to take an oath. He made it clear that he was prepared to take the oath in Parliament if required, but his enemies denied him that, on the grounds of his atheism. He was sued for voting before he had taken such an oath, in an attempt to disqualify him from parliament - by bankrupting him (the fine was £500 for each vote). His seat was declared vacant a number of times, but he succeeded in winning re-election each time. But as a result of one attempt to enter the chamber he was imprisoned in the Clock Tower beneath the bell of Big Ben. It was Tory pressure that led to his release.

As suddenly as the controversy arose - it died. Lavin asserts that it was because Gladstone now needed Bradlaugh's vote, in a more tightly balanced House of Commons.

An interesting subject - in an engaging presentation. Don't miss it in October! (for more details, and to book - press here.)
Posted by J David Morgan at 05:30