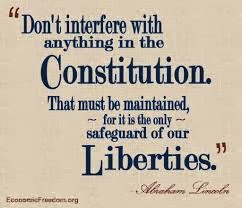 In most states, special procedures are required to change key features of the Constitution. Take a look at the "barriers" to amendment which some Constitutions put up.

"The Congress, whenever two thirds of both Houses shall deem it necessary, shall propose Amendments to this Constitution, or, on the Application of the Legislatures of two thirds of the several States, shall call a Convention for proposing Amendments, which, in either Case, shall be valid to all Intents and Purposes, as Part of this Constitution, when ratified by the Legislatures of three fourths of the several States, or by Conventions in three fourths thereof, as the one or the other Mode of Ratification may be proposed by the Congress; Provided that no Amendment which may be made prior to the Year One thousand eight hundred and eight shall in any Manner affect the first and fourth Clauses in the Ninth Section of the first Article; and that no State, without its Consent, shall be deprived of its equal Suffrage in the Senate."

"The President of the Republic, on a proposal by the Prime Minister, and Members of Parliament alike shall have the right to initiate amendment of the Constitution.

A government or a Member's bill to amend the Constitution shall be passed by the two assemblies in identical terms. The amendment shall have effect after approval by referendum.

However, a government bill to amend the Constitution shall not be submitted to referendum where the President of the Republic decides to submit it to Parliament convened in Congress; the government bill to amend the Constitution shall then be approved only if it is adopted by a three-fifths majority of the votes cast. The Bureau of the Congress shall be that of the National Assembly.
No amendment procedure shall be commenced or continued where the integrity of the territory is jeopardized.

The republican form of government shall not be the object of an amendment."

But in the United Kingdom - no such requirements are in place. Parliament could amend ANY rule or principle of the, so-called 'unwritten constitution', through an Act of Parliament. A Judicial decision could also alter the workings of the British Constitution. Conventions - an important 'source' of the Constitution - change or even develop or die through the actions of individuals.