Migration to the UK 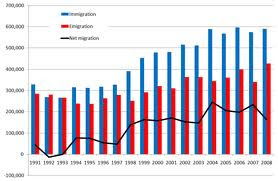 The first examinable chapter of "Life in the United Kingdom: A Journey to Citizenship" begins with a section called "Migration to Britain". It points out the long history of immigration - highlighting the safe haven given to refugees fleeing from persecution. The Huguenots (French Protestants who fled when massacres and  bans threatened their existence) and Jews (fleeing from Russia 1880-1910 and Germany under the Nazis) are mentioned - and Irish immigration resulting from famines is also discussed. (It would be ungallant of me to point out that Britain produced its own persecuted refugees - the Pilgrim Fathers didn't leave because Holland then New England had pleasanter climates! - or that the welcome received by some refugees was less than generous - see Anita Roddick's comments on the Daily Mail or the "No Irish Need Apply" notices which were rife in England. One may also wonder how much English mismanagement led to the economic problems that led to decades of exodus from Ireland).

Information is given about who has come in recent years, and where from - and unlike the popular image (thanks to the stereotyping of the likes of the Daily Mail and Daily Express) - major influxes of immigrants have come from countries like the USA and Australia.

"Check that you understand:-