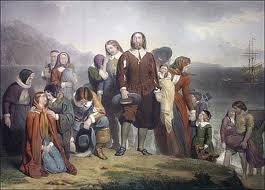 Today is the anniversary of the Pilgrim Father's arrival at Plymouth Rock - in 1620. Their journey had begun many years earlier. The first attempt to escape England was in 1607 when members of the separatist church in Scrooby, Nottinghamshire tried to (illegally) flee the country via Boston, Lincolnshire. They walked across country, paid the captain of a ship to take them to Holland - they were taken onto the ship, but he then betrayed them - which is how they came to be imprisoned in the town & brought before the court in the Guildhall.

The next year they successfully escaped to Holland - where the group (and worshipped) for over a decade. In 1620 - after much planning - they set out for America. The last place their ships left in England was Plymouth in Devon. A website dedicated to the Mayflower Pilgrims in Plymouth, Devon - can be accessed here.
Posted by J David Morgan at 05:17