Separation of Powers in the UK

University exams on Constitutional Law usually have a question on the Separation of Powers. I've already mentioned the idea of three functions of government in my post of 29th September. There are also a number of earlier Washminster posts on the subject - see my 2007 post; Comparing Constitutions; Checks and Balances;

Below is a MindMap highlighting the main points. This can be increased in size by clicking on the image. It is just a beginning - examples of where Separation of Powers is legislated for; and where the doctrine is ignored - can be added. The key thing to remember is that Britain has a system of responsible Government - Ministers are members of - and answerable to - one of the two Chambers in the UK Parliament.

The House of Commons Disqualification Act 1975 excludes a number of people from the Commons, because of their role in other branches. The Constitutional Reform Act 2005 separates the Highest Court in the English Legal System from the House of Lords.

The link to the biographical details of Montesquieu can be found here. 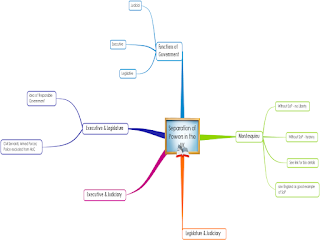