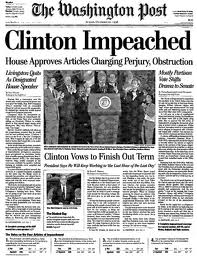 We all associate "Impeachment" with attempts to remove American Presidents - Clinton in 1998-9 (and for those of us with a longer memory - Nixon in 1974). Yet it was a concept adopted by the Americans from the English Parliament, just as it was falling out of favour here. It is now regarded as obsolete in the UK.

The House of Commons Library has produced an interesting background paper on the subject - it is available here.
Posted by J David Morgan at 10:59