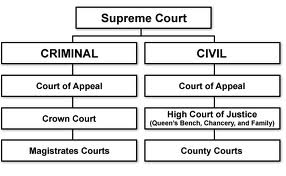 In the Common Law systems - such as those of England & Wales and the USA - a major distinction is drawn between criminal and civil law. Some of the key differences are -

(1) Criminal Law involves the State acting against the individual. Civil  Law involves a dispute between individuals (though one or more of the parties may be an artificial "individual" such as a company or a corporation - or even a State body (for example an injured citizen may sue, in civil law (the tort of negligence) the local council for injuries caused by its negligent failure to maintain a footpath).

(2) The object of criminal law is to sanction behaviour - and a breach of criminal law may lead to a punishment such as a fine or imprisonment. Civil law is about providing remedies - such as damages for a breach of contract or for injuries suffered for an accident caused through negligence. Other civil remedies include "specific performance" which involves a court order to someone to carry out the duty they undertook to perform as part of a contract; or an injunction ordering them to do, or desist from doing something. So in a sense, criminal law is 'public law', whilst civil law is 'private law'.

(3) Different Courts are involved. In general Magistrates Courts and Crown Courts deal with criminal law and Civil cases are heard in the County or High Courts. There is some overlap - Magistrates Courts have some civil jurisdiction - and the higher appeal courts - the Court of Appeal (divided into a Criminal and Civil Divisions) and the Supreme Court - deal with both.

(4) The language is different - in Criminal law a prosection is brought, and if successful the defendant is found guilty. One "sues" in civil law - and the result is a finding of liability.

(5) The parties have different names - in criminal cases we speak of the prosecution and defendant; in civil cases the claimant sues the respondent.

(7) The rules of the "burden of proof" differ - in general the burden mainly rests upon the prosecution in criminal cases (though in certain circumstances, once particular facts are proved, the burden may shift to the defendant). In civil law the burden may be more equally shared.

(8) The State usually brings criminal prosecutions (although private prosecutions are possible for many offences). It can also halt prosecutions. As civil cases are seen as private actions - the State cannot order the halting of a civil action.

(9) Much of civil law can be said to be "voluntary" - parties can decide not to enter into obligations with each other (they can decide not to enter a contract; or agree that disputes will not be subject to court adjudication, or even decide to make disputes subject to a particular jurisdiction - look at some contracts (the 'terms and conditions' that we "agree" to, for example when signing up for a service on the internet - they may make the agreement subject to the laws of England; or New York State etc)). Liability can be ruled out - "We make no representations that information is accurate and up to date or complete and accept no liability for any loss or damage caused by inaccurate ..." [though this is now limited in certain circumstances].

Criminal law however is not voluntary - you can't opt out of it!!!!

There are other differences - can you add to this list?

One important point to make - the same act can have criminal and civil consequences. I drive carelessly, perhaps after a few glasses of champagne, and knock down the wall around your house - the police will interested in my behaviour - and may send the details to the CPS (Crown Prosecution Service) - who may decide to bring a criminal prosecution. You may sue me, in order to recover from me the costs of rebuilding the wall.
Posted by J David Morgan at 06:51