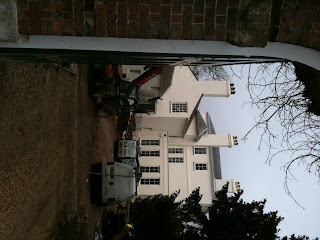 Since February I have been visiting Aylesbury three times a week to teach law at Aylesbury College. Some of mstudents took their exam on Friday, and the rest of the exams take place this week. So, the number of visits will fall off for a while.

It is appropriate that my final law sessions should occur this week in Aylesbury. The news has been dominated by the issue of 'Freedom of Speech', as a well known TV personality and journalist faces the possibility of jail for Contempt of Court for tweeting the name of a football player who gained an injunction stopping anyone mentioning the fact of his adultery, or even that he had gained such an injunction. A Scottish newspaper published a photo of the player, with his eyes blocked out, but soccer fans (I'm not one) wouldn't have much difficulty in recognising the player. The editor may be liable. Thousands refused to be gagged yesterday by tweeting the name.

What has this to do with Aylesbury? In the 18th Century the MP, and resident of the town was a man called John Wilkes. He went to jail for publishing material which upset the rich, famous and powerful. He was one of the heroes of the struggle for freedom of speech in England (as well as a friend of liberty for America). His former home still stands in Aylesbury.

Another hero of liberty, who found that a majority of Judges were not prepared to support him (The Ship Money case), has his statue in the centre of Aylesbury - John Hampden - who was also the local MP for a short time (he represented nearby Wendover for a longer period).

Sad to say, our judges have not been the protectors and promoters of free speech in England. So it is again. That's why the right to trial by jury needs to be protected. There have been times when juries of ordinary citizens have refused to uphold attempts to enforce laws which do not have the consent of the people. Of course if any action is taken against journalists, tweeters or Twitter itself, there will not be a jury. Contempt of Court cases - which can lead to 2 years in jail - are exclusively dealt with by the judiciary ( the third branch of Government).
Posted by J David Morgan at 05:27