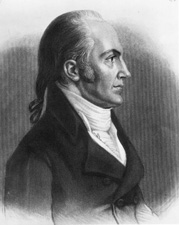 The series on the US Constitution will resume on Monday 21st February.

Two hundred and three years ago today, Aaron Burr, who had been Thomas Jefferson's Vice President (in 1801-1805) - was arrested for treason. He was accused of preparing a private army to invade Florida, New Orleans or Mexico; or to lead a secession of the western states from the Union; or all of those things. He was aquitted.

Burr is certainly one of the more interesting, though often forgotten, characters in US History. His career swung between great heights, and deep lows. He served as a US Senator before becoming Vice President (and thereby President of the Senate). He lost his seat in the Senate after his first term - and tied with Jefferson in the ballot for the presidency after a remarkable comeback. He fought a duel with Alexander Hamilton, another of the great founders of the US - and killed him. He was indicted for murder in both New York and New Jersey - but escaped trial, eventually returning to complete his term as Vice President. After his aquittal for Treason he sailed to England hoping to gain support for a revolution in Mexico. He was ordered out of the country and traveled in Europe to Sweden, Denmark, Germany and Paris. There he tried to garner support from Napoleon. He returned penniless to the USA.

Treason as a term, covers the most serious acts of betrayal of one's country or sovereign.


"Under the law of the United Kingdom, high treason is the crime of disloyalty to the Crown. Offences constituting high treason include plotting the murder of the sovereign; having sexual intercourse with the sovereign's consort, with his eldest unmarried daughter, or with the wife of the heir to the throne; levying war against the sovereign and adhering to the sovereign's enemies, giving them aid or comfort; and attempting to undermine the lawfully established line of succession."
A short biography can be read here.
Posted by J David Morgan at 05:12