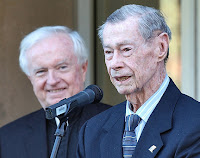 There are two former Congressmen - William Walsh (pictured - Dec 2009) and Perkins Bass, who are both aged 98. They also are both fathers of Congressmen! A list on Wikipedia (OK it's a source to be taken with a great pinch of salt - I once found a claim that the Peer who I sat next to was the Deputy Chief Whip in the House of Lords - he was surprised as I was by this news - which had no basis in fact - but the article cites both the Congressional Biographical Directory of the United States 1774–present and the The Political Graveyard as sources - I haven't fully checked out the raw data, but am prepared - as long as no one relies on the claims - to accept it) - lists the 100 oldest surviving members of Congress - the 100th oldest is 85 years, & 283 days.

Perkins Bass first sat in the House of Representatives on January 3, 1955 - later that year John Dingell - who still sits in the House, joined him (though Bass is a Republican and Dingell a Democrat). Lord Glenamara, better known to most people as Ted Short, is still alive and a member of the House of Lords (I've not seen him there, but he has a Life Peerage) was also born in 1912.
Posted by J David Morgan at 05:45