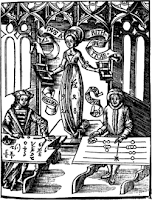 Richard FitzNigel (sometimes referred to as Richard FitzNeal) was the illegitimate son of the Bishop of Ely. His father paid Henry II to take Richard on as the King's Treasurer. He worked in the Exchequer for over 40 years. In 1177 he was asked by the King to write about his work, producing a text known as "Dialogus de Scaccario" (Dialogue Concerning the Exchequer).

In this book he descibed how he used a chequered cloth as a sort of abacus. The cloth (the 'Exchequer' itself) was laid over a large table, 10 feet by 5 feet, with a lip on the edge of 4 'fingers', on which counters were placed representing various values. The name is also found in the American word "checkers", a game which English readers would know as "draughts". It is said that this is the origin of the term "Exchequer" - which of course is now in the title of Britain's Finance Minister - "The Chancellor of the Exchequer"
Posted by J David Morgan at 05:44