On my Spectrum On Air Show - "PPS" I played a song by Tecwyn Ifan called 'Y Dref Wen', and told the story of how I stumbled upon a Youtube video which introduced to me to the song, helped me on my path towards learning Welsh and to researching "Cyndyllan", whose death in the the White Town (Y Dref Wen - in Welsh) inspired the song.

Click here to see the  video with the words - in Welsh and English, - and to hear the song. 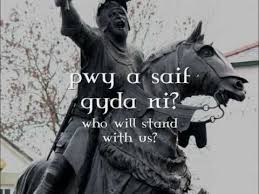 There are two ancient pieces of Welsh poetry which tell the story of Cynddylan - though they are difficult to reconcile. We don't know exactly when Cyndyllan lived or died - there are a number of theories. It is believed that he was a Prince or King in the Welsh area kingdom of Pengwern (modern area now solidly within England (Shropshire, possibly extending as far as into Staffordshire), but was at the time and beyond within the Welsh kingdom of Powys.

The two poems are the 'Marwnad Cyndyllan' and the 'Canu Heledd'.

The Encyclopedia of Celtic Culture states -

Cynddylan fab Cyndrwyn (? †15 November 655) was a Welsh chieftain who is known to us primarily from two substantial pieces of early poetry: (1) Marwnad Cynddylan, a 71-line awdl on his death addressed to an unnamed king of Gwynedd at Aberffraw, whose attitude is that of a contemporary court poem and is widely accepted as authentic; (2) the 113 englynion of Canu Heledd (Poetry of Heledd), whose attitude is also contemporary, but the dramatic persona is not that of a court poet, but rather Cynddylan’s bereaved sister Heledd, wandering alone through the deserted ruins of the war-ravaged kingdom.This englyn cycle is usually assigned to the 9th or 10th century.

Some details of the historical context can be gleaned from these poems. Both Marwnad Cynddylan and Canu Heledd refer to a place called Tren, probably the river Tern in central Shropshire (Welsh swydd Amwythig). A stray englyn from Canu Heledd states that Cynddylan was part of the coalition headed by Penda at the battle of Cogwy or Maserfelth, where Oswald of Northum-bria was slain on 5 August 642 (Beda, Historia Ecclesiastica 3.9).The site of this battle was most probably near Oswestry in Shropshire, where Oswald was killed and crucified on ‘Oswald’s tree’ (Welsh Croesoswallt). According to Marwnad Cynddylan, the hero answered the call to arms of mab Pyd, which refers to Panna son of Pyd, the latter being the Welsh name for Penda of Mercia, who is known to have had Welsh allies when he fought against the Northumbrians in the mid-7th century. Marwnad Cynddylan mentions a ‘fight for the cattle (or the spoils) of Pennawg’, which may refer to an attack known to have been made by Penda of Mercia and Welsh allies on the Northumbrian court at Bam- burgh c. 650. The Marwnad describes a major, otherwise unknown, battle at Caerlwytgoed, the Roman fortified town of L{toc{tum at Lichfield, Staffordshire. Canu Heledd describes desolation in several places for which probable locations can be found in Shropshire: including Pengwern (probably in Shrewsbury), Eglwysseu Bassa (Baschurch), Dinlleu Vreconn (the hill-fort of theWrekin nearWroxeter), Romano-British Vriconium, and Ercal (High Ercall or Child’s Ercall). There is some question as to whether these places represent a continuous recollection of the old pre- Anglo-Saxon landscape of what became western Mercia, or a later Brythonicizing of an already English countryside, in effect creative historical fiction. For example, Baschurch seems to be a purely English name and Eglwysseu Bassa a Welsh translation. Of course, it is possible that Cynddylan had ruled a linguistically mixed country in the 7th-century, including a com- munity of Anglo-Saxon Christians.

Marwnad Cynddylan and Canu Heledd agree in portraying a military disaster in which Cynddylan fell, along with numerous noble kinsmen and comrades. The event itself is most plausibly identified with the battle of Winwæd, where Penda and all his many allies—called duces regii (royal generals) by Beda (Historia Ecclesiastica 3.27) and reges Brittonum (kings of the Britons) in Historia Brittonum (§§64–5)— fell in battle against Oswydd of Northumbria on 15 November 655. In the englynion, Cynddylan is once identified as ruler of Powys. The royal lineage known as the Cyndrwynyn (progeny of Cynddylan’s father, Cyndrwyn) do not seem to have survived into the 9th century, at which time Historia Brittonum (§§32–5) identified the kings of Powys as Cadelling, and Eliseg’s Pillar traces the same group back to Gwrtheyrn. Marwnad Cynddylan mentions the Cadelling twice, viewing them with hostility, as if they were rivals.