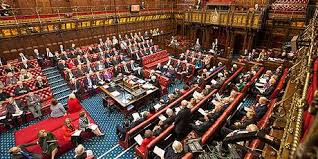 Once there was only one way out of the House of Lords - in a box (Not literally - as part of the Palace of Westminster there is a practice that no one is pronounced dead within the building - and of course most people actually die outside. But membership of the House ended only with death - the exception being the Bishops, who retired from the House when they retired from their Church position.)

Due to the legislation named above, members can now retire. They can also be removed if convicted of a serious criminal offence, or completely fail to attend. Details of the legislation - and how it has been used is set out in a House of Commons Library Paper. To date 48 have retired, and 4 ceased to be members due to non-attendance.

The paper is available here.

(The picture shown is that of the House at work - rather than the usual picture of the House in ceremonial dress - which ONLY occurs at the State Opening. The House is actually a very hard working institution!)
Posted by J David Morgan at 05:00