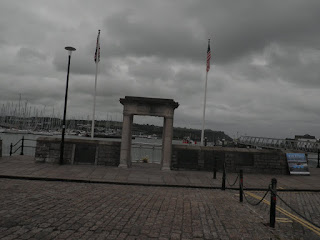 I've just returned from a stimulating conference in Plymouth. It began on Independence Day, in the city where the Pilgrim Fathers last left the British Isles as they headed for America.

The conference was organised by the Transatlantic Studies Association - and it was their 15th Annual Conference. The Association brings together many disciplines - so we had a wide menu of workshops - which ranged from literature to history, through International Relations and on to politics. There were also keynote lectures each day. We began with a roundtable involving representatives from sister organisations (I took part on behalf of the American Politics Group). I found the whole conference incredibly stimulating. The conference programme is available here. Recent events - the Brexit vote - dominated discussions and conversations around the conference, as did the upcoming elections in the USA. Delegates came from across Europe and from Canada and the USA.

We also had a dinner at the National Marine Aquarium - which had a fantastic backdrop with fish swimming around as we ate and listened.

Details of the Transatlantic Studies Association can be found at http://www.transatlanticstudies.com
Posted by J David Morgan at 06:03