Whatever happened to the G.O.P.? 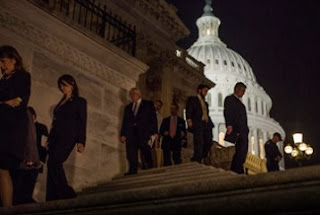 The crisis is averted ...for the moment, but it's been a disastrous time for the USA - and Congress has had its reputation shredded. How did it come to this?

There are many reasons why Congress has got itself into such a mess. Bipartisanship has become rare - the parties getting further apart; civility has flown out of the window and a new "macho" politics has taken hold. The same 'win at all costs', aggressive attitude which brought the banking industry to ruin has infected politics. Who would have imagined that so many members of Congress would be prepared to allow the US to default on its debts?

Even at the 11th hour and 59th minute - 18 Senators and 144 Members of Congress (that's 30% of its membership) voted against the last deal to avoid a default!

I listened to Senator's Cruz's speech in the debate (thanks to the miracles that are C-SPAN and wifi-enabled iPads) - it was full of slogans and a complete blindness to the impact that his advocacy, if successful, would have on the rest of the world - let alone ordinary Americans.

Newt Gingrich has always been of interest to me - he's had a big impact on the Republican Party and Congress. He has a good understanding of how powerful the use of language can be - and was adept at using congressional procedures to advance his ends. But he was a bomb thrower. His tactics poisoned Congress. His successors are worse - what we saw in recent days and weeks was a host of political suicide bombers - prepared to destroy everything - and hurt lots of people - in order to advance their ideology.

Legislatures need to be about "deliberation" and negotiation. Different views and interests have to be accommodated with 'give and take'. The alternative is violence. It's time to call a halt on the destructive politics which has paralysed a great institution and a great country. Some older people will remember the Republican leaders of old - they fought their corner, certainly - but did so with respect for other people and theirm points of view. They are sorely missed.

Please do send me your comments.