"It is a tremendous force for good" 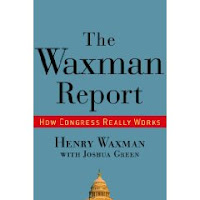 This was written of Congress - not a century ago - or in some "golden age" - but in Henry Waxman's recent "Waxman report".

The minutae of process - and the long time that legislation can take to develop - often obscures what is achieved. In Waxman's book - which I heartily recommend to citizens and propective legislators [both sides of the Atlantic] looks at a series of case studies in which the legislative process and effective scrutiny have brought benefits to citizens.
This is a year in which elections will bring many claims that Washington and Westminster aren't working. It will be claimed that "money talks" - yes it does - but as Waxman points out "run as it should be, it [Congress] ensures that no special interest can ever be powerful enough to eclipse the public interest"
Do you not believe that? Well read Waxman's arguments in his book.
Posted by J David Morgan at 05:13