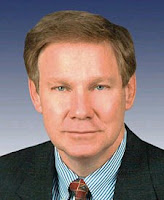 Representative Tom Davis announced that he would not contest the 11th District of Virginia in this month's elections. As a result, the Northern Virginia seat which he represented for almost 14 years, became an open seat, which was won by Gerry Connolly for the Democrats.

Last Friday he announced that he would leave Congress immediately, in order to start his new career at Deloitte Consulting in their federal government services division. Representative-Elect Connolly will not take his seat until the 11th Congress begins at noon on January 3rd. In the meantime the Clerk of the House will manage Davis’ former office .
Posted by J David Morgan at 05:08