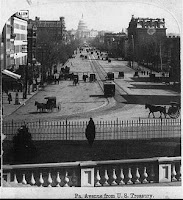 When L'Enfant planned the city of Washington, Pennsylvania Avenue was designed to link the older settlement of Georgetown to the President's House and the Capitol. Bridges were to be built over Rock Creek; Tiber Creek and the Eastern Branch (Anacostia River). The route loosely follows an earlier track which took advantage of the ridges in the area known as the Georgetown Ferry Road.

Today Pennsylvania Avenue runs for seven miles from Georgetown (it begins at the junction of 29th and M Streets [NW]) to the South Eastern boundary of the District of Columbia. In Maryland it continues past Andrews Air Force Base (Maryland Route 4). It's most famous stretch links the White House to the Capitol. This part is sometimes referred to as "America's Main Street". The Inauguration Parade and well as other national parades and protests use this avenue. Streetcars ran along Pennsylvania Avenue from Georgetown to the Anacostia for 100 years, ending in 1962.
Posted by J David Morgan at 05:05