An unfortunate phrase to use 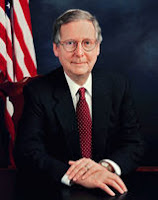 Senator McConnell, in a guest column in Roll Call of 7th September argues "We can do all this, but only if we put aside the partisanship that marked the first eight months of this session. It’s time, in other words, for both parties get back to basics." It was a choice of words that no British politician would have used - because of the trouble it landed Prime Minister John Major in during the troubled final years of Conservative Government.

In 1993 Major used the phrase 'back to basics'. He always claimed that it had a wider meaning, but the British press chose to interpret it in the sense of 'family values' - and felt Major had given them the green light to expose personal scandals. As the BBC website comments "In 1993, the Major government - perhaps fatally - launched the 'Back to Basics' campaign. It was notorious for its high moral tone and sparked intense media interest in MPs' private lives.
Environment Minister Tim Yeo let the side down almost immediately after a tabloid exposé in January 1994 revealed he had fathered an illegitimate child by Conservative councillor Julia Stent... PPS David Ashby also quit after admitting that he shared a hotel bed with another man.
Minister for Aviation and Shipping, the Earl of Caithness, then resigned after the suicide of his wife, who shot herself in despair at his relationship with another woman. In February 1994, PPS Hartley Booth, Methodist lay preacher and grandson of the founder of the Salvation Army, quit after a "friendship" with a Commons researcher. Government Whip Michael Brown succumbed in May 1994 after a storm over tabloid allegations of a homosexual affair with a 20-year-old student." The ultimate revelation was that Major himself had had an affair with Edwina Currie.
So when I saw the headline in Roll Call, I was a little surprised to see that unfortunate phrase used. In view of some of the current troubles plaguing Senate Republicans - the Larry Craig and David Vitter issues - perhaps another choice of words would have been happier.