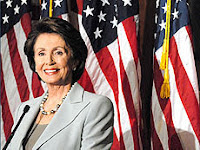 While Parliament and Congress are taking a break, Washminster will profile some of the key players in each legislature. Please do post any comments or additional information. Our first subject is Nancy Pelosi, Speaker of the House of Representatives in this 110th Congress.

Ms Pelosi represents the 8th District of California, which covers most of San Francisco. She moved to California with her husband, Paul - who was originally from the Golden State.

The future Speaker was born into politics. Her father, Thomas D'Alesandro, was himself a member of the House of Representatives when Nancy was born. After serving in the House between 1939 and 1947, he was Baltimore's mayor for 12 years. She attended Trinity College in Washington DC, majoring in Political Science. Ms Pelosi was an intern for Maryland's Senator, Daniel B Brewster, working alongside Steny Hoyer, now Majority Leader in the House of Representatives.

After moving to California she played an active part in the political life of the State, chairing the California Democratic Party in the early 1980s. Elected to Congress for the first time in June 1987, she has worked her way up to the top of the Democratic caucus in the House of Representatives. She was elected whip in 2001; Minority Leader in 2002 and when the Democrats regained the majority for the 110th Congress she became the first female Speaker. The scholar and commentator Norman Ornstein has described her as one of "the most savvy political figures around".

Ms Pelosi has set the record for the longest continuous period of service in history on the House Permanent Select Committee on Intelligence.