Politicians today seem well behaved compared to their predecessors. The red lines in the Chamber of the House of Commons are a reminder of the days when members would resort to sword fighting. Fights broke out on the floor of the House of Representatives. In February 1927 the following resolution was submitted by Representative James A Gallivan (Democrat, Massachusetts )
Whereas the physical exercise of hostile encounter by means of human fists is becoming of daily occurrence in the House of Representatives; and
Whereas such encounters are being conducted in an irregular manner, with small regard to race, weight, reach, height, or classification of Members to insure equality and fair fighting; and
Whereas most of the principal communities of the United States have boxing boards or commissions, whose duty it is to regulate the sport and insure fair play: Therefore be it
Resolved, That a committee be appointed by the Speaker of the House, who shall be chairman ex officio, to be known as the Boxing Board of the House of Representatives, to have full authority in the arranging of bouts between Members according to weight, corporeal and mental, age, and experience; and it be further
Resolved, That said board shall arrange to hold the bouts in Statuary Hall, under the paternal eyes of the fathers of the Republic, and under no circumstaces shall said board authorize bouts either in the House of Represetatives or before committees of the House unless contestants sign written agreements, approved by the chairman, to abstain from hair pulling, profanity, and tobacco chewing, and the use of wrist watches or flasks; and be it further
Resolved, That the Honorable William D Upshaw, of Georgia, is appointed permanent referee of all bouts held under the jurisdiction of said board, his salary and expenses to be paid out of the contingent fund of the House."
_________________
Note - William David Upshaw was a congressman from Georgia nicknamed "Billy Sunday of Congress" who was a strong advocate of prohibition (In 1932 he was the Prohibitio 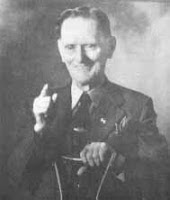 n Party candidate for the Presidency) - he became known as the "driest of the drys." and had been instrumental in making Georgia the first 'dry' state in the South. He fought to eliminate the teaching of evolution from public schools. When he was 18 years of age he fractured his spine and was crippled. He was confined to bed for the following 7 years, and afterwards was reliant on crutches. He served in Congress from 1919 to 1927.
In February 1951, at Calvary Temple, Los Angeles, the Rev. William Branham of Jeffersonville, Indiana was holding a healing meeting. After Branham was carried, exhausted from the pulpit, the pastor of the Temple returned to announce, "Brother Branham says 'The Congressman is healed!'". Upshaw laid aside his crutches and enjoyed the full use of his legs until his death in November 1952.