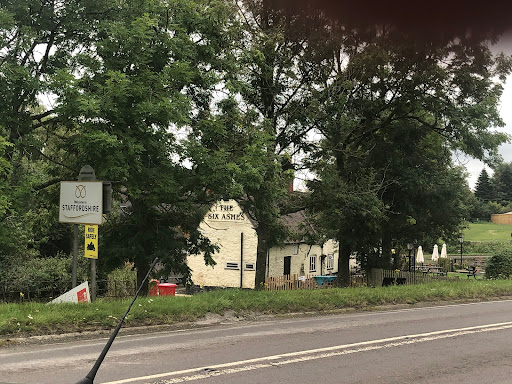 This village, on the border today of Staffordshire and Shropshire - was proposed as a meeting place of international borders of much greater significance. In 1405 Owain Glyndŵr, Henry Percy, the 1st Earl of Northumbria and Edmund Mortimer (who had a better claim to the throne than Henry IV who usurped the throne from Richard II (who Henry imprisoned - and who died shortly afterwards)) agreed in the "Tripartite Indenture" to divide England and Wales into three countries - with "Onnenau Meigion" as the place where the boundaries of the three states would meet.

“... Owain and his heirs shall have the whole of Cambria or Wales, within the borders, limits, and boundaries underwritten, divided from Loegria, which is commonly called England; namely, from the Severn coast where the River Severn leads from the sea, going down to the North Gate of the city of Worcester [Foregate]; and from that gate directly to the ash trees commonly called Onennau Meigion in the Cambrian or Welsh language, which grow on the high road from Bridgnorth to Kinver [Six Ashes]; thence directly by the high road, which commonly is called the old or ancient way, as far as the head or source of the river Trent [Biddulph Moor, north of Stoke]; thence directly to the head or source of the river commonly called the Mersey [Compstall, east of Manchester]; and thence, as that river leads to the sea [at Liverpool], going down within the borders, limits, and bounds written above.”

- and Edmund Mortimer would have the rest of Lloegr.

This place was chosen because it was the subject of a prophecy of Merlin - that a great eagle  would muster a host of Welsh warriors who would defeat the English. Sadly, the "prophecy" was centuries later than the time of Merlin - and may even be a "post-dated prophecy" of a defeat here of Penda of Mercia by Cadwallon ap Cadfan of Gwynedd in the Seventh Century.

Glyndŵr tried to make his way to Six Ashes, but was halted by Henry IV at Great Witley, about 15 miles away. A stand off ensued, with both sides eventually retreating.