There are REASONED arguments being used in the EU Referendum! 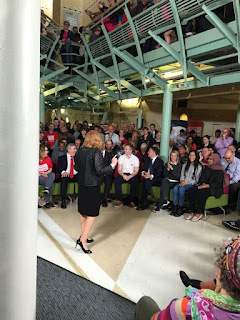 Yesterday I attended the meeting at which Gordon Brown made the progressive case for Britain remaining within the EU. Sadly, no text appears to be available  (he certainly wasn't speaking from notes or an autocue) - but he has published a paper called "A Positive British Reform Agenda for Europe". It is available here.

A  brief report from ITV can be found at http://www.itv.com/news/2016-06-13/gordon-brown-eu-can-help-tackle-terrorism-and-illegal-immigration/

Whilst searching for a text, I did come across the text of the speech delivered by Hilary Benn. I commend it to you - it is well reasoned, based on a strong foundation of history and fact, and represents the best traditions of the Labour Party and progressive thought.