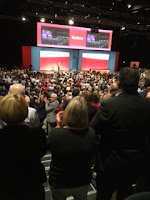 It's been an eventful time of late. In the UK the Labour Party surprised itself by electing Jeremy Corbyn as its new leader. He has no ministerial or front bench experience - and is ideologically further to the left than most of the Parliamentary Labour Party - but gained an impressive win, and the term "Corbyn-mania" has entered the language. (I never recall the terms Wilson-mania or Callaghan-mania in my youth!). I attended the Party Conference in Brighton - and it was interesting to feel the strange mix of enthusiasm and trepidation - with some individuals showing both.

The Conservative Party Conference was even more interesting - as the battle for the succession to Cameron was clearly in full swing.

Parliament returns this week - and we will see how these developments impact on the atmosphere in Westminster - and upon events themselves.

In Washington, events took an even more dramatic turn - with John Boehner's shock announcement that he was standing down as Speaker. Then, as the GOP conference met to elect his successor, the favourite - Majority Leader, Kevin McCarthy withdrew. The disruptive power of the small group of ultra-conservatives was evident for all to see. Further developments will be monitored closely!
Posted by J David Morgan at 05:30