I was in Birmingham this week - though not to attend the Conservative Party Conference. I was visiting my mother and giving a law tutorial - but couldn't miss the impact that the Conference was having in the city. My buses were diverted - and whilst sitting in Starbucks, I saw many delegates walking down New Street wearing their conference passes.

But I did attend the previous week's Labour Conference in Manchester - and if you look back at previous posts in earlier years - you'll see that I have described and explained what goes on inside a party conference.

In the USA Party Conventions are held before each Presidential Election. In Britain, party conferences are held annually (and sometimes more frequently). I had the privilege of reading the earliest Labour Party Conference reports whilst I was undertaking a political history research project. Today of course, the primary audience isn't the delegates - or the other people attending the conference in person - but the wider public. It is the venue for major policy statements - and particularly in the run up to a General Election (and Britain's is due on May 7th next year) - it is the opportunity to showcase the policies which each party will be pushing during the election. 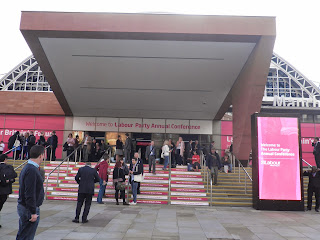