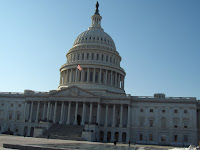 This is the one thousandth post on Washminster! So here's to the next thousand! With a General Election just weeks away - and many months of congressional manoeuvring before the mid-terms, we can expect some interesting issues to cover.

I was asked recently about the study of 'rollcall' votes in the British Parliament. In the United States the individual votes cast by each Member are studied in detail. Figures can be produced showing how individual members compare to their colleagues - in terms of party loyalty & assessments made of their labor, liberal, business and conservative viewpoints. In the UK this data is of less value. Party voting by members is much stronger. In the House of Commons almost all Members vote almost all the time, in line with the party whip. As a result there is much less analysis of rollcall votes.

The Lords Divisions Analysis is a useful tool for looking at votes in the Lords - it can be used to see who votes - and (of particular importance) who is prepared to vote against the party whip. It can be accessed here.

There is an excellent website which looks at Common's rebellions called revolts.co.uk.
To look at the record of particular MPs or Peers - the 'they work for you' site is useful (though it needs to be taken with a pinch of salt - it is easy to manipulate the result - by asking pointless questions, or intervening unnecessarily).
Posted by J David Morgan at 05:01