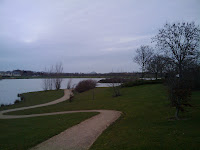 Today I am moving house from Rugby - a Midlands town through which the River Avon (the same one that is associated with Shakespeare) flows - though its much smaller in Rugby than in Stratford. Rugby is the place where the game of the same name first began (and from which American Football is descended).
I will be moving to Milton Keynes - about 40 miles closer to London -and a city with a more American feel than the traditional English town or city. It has a grid road system which creates blocks of approximately one square kilometre. The new home will be in Furzton - a lovely district with a beautiful lake. Ice hockey is played at the Leisure Plaza by MK Lightning; American Football by MK City Pathfinders (Manor Fields, Bletchley) ; Baseball by BaseballMK; and Basketball by MK Lions (Bletchley Leisure Centre). The city was used for the filming of the Superman IV movie - with Milton Keynes Central Railway Station as the UN Building. http://www.movie-locations.com/movies/s/superman4.html
You can read more about the city at http://www.mkweb.co.uk/
As you can imagine, I'm going to be quite busy today and for the new few days. It will also take a little while for telephone and broadband services to be installed. Therefore Washminster will not reappear until next Tuesday - when I'll be back at work in Westminster.
Posted by J David Morgan at 05:35